( I posted this a few years ago on my other blog, when they were having a recall on infant formula. I was just going to give the recipes of homemade formula but thought I would also include this since there is a lot of good information.) 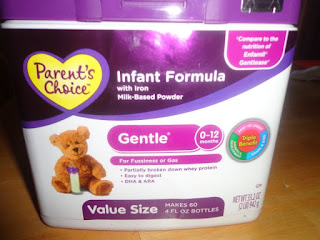 A friend and I were talking the other day about the high cost of baby formula. I told her when I was a baby they used pet milk and corn syrup. OK how many of you have heard of this If you have you may be telling you age lol. That was what they used back then, and then gave infant vitamins.

Anyway I got to thinking what would happen if you have no access to baby formula. Breast feeding is the best thing to do but what if you don’t make enough milk. I had to supplement my two oldest with formula because I didn’t have enough milk. Baby formula has an expiration date and does not last very long so it is not an option for long term storage.

I decided to see if I could find the recipe for the canned milk formula I found a lot more then I was looking for. Formulas have some very bad things in them here is a couple  of  things that I found.

90 Percent of U.S. Infant Formula May Be

NaturalNews) Up to 90 percent of the infant formula sold in the United States maybe contaminated with trace amounts of melamine, the toxic chemical linked to kidneydamage, according to recent tests. The FDA’s test results, which the agency hid from thepublic and only released after the Associated Press filed a Freedom of Information Actrequest, showed that Nestle, Mead Johnson andEnfamil infant formula products were all contaminated with melamine.

The AP is also reporting that Abbott Laboratories conducted its own in-house tests that detected trace levels of melamine in its formula products. Together, these infant formula manufacturers make about 90 percent of the infant formula sold in the United States.Prior to these test results being made public, the FDA had published a document on its website that explained there was no safe level of melamine contamination in infant formula.

Specifically, the FDA stated, “FDA is currently unable to establish any level of melamine and melamine-related compounds in infant formula that does not raise public health concerns.” Once tests found melamine in U.S.-made formula products, however, the FDA changed its story. As of today, the FDA has now officially declared melamine to be safe in infant formula as long as the contamination level is less than one part per million (1 ppm).Astonishingly: The FDA has no new science to justify its abrupt decision declaring melamine to be safe!

Protecting Big Business instead of American babies Rather than being based on science, the FDA’s decision appears to be based entirely on creating cover for U.S. infant formula manufacturers whose products were found to be contaminated with melamine. The “acceptable” level of contamination (1 ppm) is conveniently just above the levels found in U.S. infant formula products, thus placing U.S. infant formula in the “safe”contamination level category. And yet the FDA has conducted no safety testing whatsoever to determine whether 1ppm of melamine is safe for infants to consume. There is no science involved in this decision whatsoever. Rather than this decision being based on science, the FDA is once again resorting to politically-motivated decisions that seek to protect the profits of Big Business rather than the safety of infants and children. Recall that the FDA also recently declared Bisphenol-A to be safe for infants to consume,even while countries like Canada banned the chemical from baby bottles.The FDA, it seems has never met a  corporate-sponsored chemical it didn’t like.You can read the rest of the article here

As scientists attempt to replicate human breast milk as
closely as possible, the concoctions they prepare become
more and more questionable and complex.

Lactose, fructose, glucose, maltodextrose, carbohydrate (corn maltodextrin,modified corn starch ,corn syrup solids), protein (whey, casein, soy protein isolate), fat (soy oil, coconut oil, corn oil, sunflower oil, palm or olein oil*) – Usually sourced from GMO’s – vitamins,folic acid, pantothentic acid, calcium, minerals, phosphorus, iodine, sodium chloride,potassium chloride, and other nutrients, such as rice starch, dietary fibre and amino acids, as well as nucleotides, which is something scientists have been disagreeing about their efficacy on immune system development for 15 years.
“Following the research that showed positive cognitive effects of long chain polyunsaturated fatty acids (LC-PUFAs) docosahexaeonic acid (DHA) and arachidonic acid (ARA) found in breast milk, nutrition-scientists came up with the latest novel ingrediets: LC-PUFAs manufactured from  plant sources. These LC-PUFAs contain triglycerides not found in human milk and are thus structurally different to the LC-PUFAs in human milk. T he DHA in infant formula is extracted from fermented microalgae, Cryptecoiunium cohnii, and ARA is extracted from soil fungus, Mortierelle alpina.” These are new to the food chain,there fore the long term effects of these ingredients are not known. In addition, the extracting method is concerning. Hexane, a petroleum-refining by-product solvent is used to extract the oil. It is also a known neurotoxin and air pollutant.There have already been studies done on the plant based LC-PUFAs and concerns are continually raised, both on its efficacy and side effects. In addition, there is the ethics.

For instance, why, if there are known concerns, does its addition to certain formulas raise the price of that formula? There is more. Marsha Walker, an executive member of NABA (National Association of Breastfeeding Advocacy) has produced a fully referenced assembly of scientific studies that show a cocktail of chemicals in infant formula, such as: Aluminum, silicone, cadmium, MSG, phytoestrogens, GMO soybeans, phosphate, phthalates and Bisphenol-A. You can read more of this here.

OK so back to the original post of trying to find an alternative to store bought formula I found some very simple ones and a couple more complex ones. This first one would use what you have in your food storage and is what was used before the invention of store bought baby formula Plus it is what I was given and I turned out OK at least I think I did although some may not think so lol.

The first one is

13 oz. Evaporated Milk
19 oz. Water, Boiled
3 Tbsp. Sugar OR Corn Syrup
( I know corn syrup is not good for you and most is from go corn. So if you can get organic and non GMO,  or use sugar it would be better. But in  a crises situation or and emergency you know you can use plain corn syrup. Also never use honey .

Gradually shift from the first formula to the third formula over the first 4 months, increasing
the amount as your baby grows. After this, if the baby is gaining weight and eating solids,
you would give undiluted whole milk or evaporated milk diluted with equal parts of water,
and omit the sugar. If you use this you will want to add some vitamins such as
Poly vi sol vitamin liquid.

You can go here for a goat milk formula the only thing being is she is using things that you most likely
wouldn’t have in your storage but if you are wanting an alternative to the store bought this would be
good.
.
Here are a couple from Sally Fallons book nourishing traditions ( A book that I highly recommend)

Raw Milk Baby Formula
(Adapted from Nourishing Traditions by Sally Fallon)
Makes +- 1 liter.
The addition of gelatine to cow’s milk formula will make it more digestible for the infant. Use only truly expeller-expressed oils in the formula recipes, otherwise they may lack vitamin E.
The ideal milk for baby, if he cannot be breastfed, is clean, whole raw milk from old-fashioned cows, certified free of disease and feed on green pasture.

(Adapted from Nourishing Traditions by Sally Fallon)
Although goat milk is rich in fat, it must be used with caution in infant feeding as it lacks folic acid
and is low in vitamin B12, both of which are essential to the growth and development of the infant.
Inclusion of nutritional yeast to provide folic acid is essential. To compensate for low levels of
vitamin B12, if preparing the Milk-Based Formula (above) with goat’s milk, add 2 teaspoons
organic raw chicken liver, frozen for 14 days, finely grated to the batch of formula. Be sure to
begin egg-yolk feeding at four months.There are a couple more recipes of hers here

I think that even if you used the canned milk formula with the
vitamins you would be better off than using store bought at least
you are not having to worry about all the chemicals and the added
happy crap they put in the store bought stuff.

Just my thoughts anyway especially after reading this 80-percent-of-us-packaged-foods-may-contain-dangerous-chemicals_062013  and are banned from other countries.It is a shame what the FDA and our government will allow, and do for the sake of money.